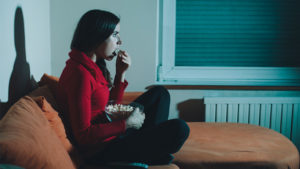 I like a good binge-watching session as much as anyone. Not long ago, I blew through all 96 episodes of Entourage in about two weeks! It seems I’m in good company. According to a recent survey, 70 percent of Americans are binge watchers.

With technology including streaming services and on-demand content transforming the way we consume media, it’s important to ask: What effects does all this binge-viewing have on the soundness of our sleep?

Binge watching and sleep quality
A new study tackles just that question. Scientists from University of Michigan and Belgium’s University of Leuven investigated the prevalence of binge-watching, and how these extended viewing sessions impact sleep. The study included 423 young adults between ages 18-25. Researchers analyzed their regular TV-watching habits, binge-watching habits along with assessments of their sleep quality, fatigue, and insomnia.

They found strong links between binge-watching and sleep problems:

How does binge watching disrupt sleep?

There may be a number of factors involved. Researchers in this study found sleep disturbances from binge-watching were a result of mental stimulation that came from extended viewing in the evenings, a form of stimulation known as “pre-sleep arousal.” Being exposed to the content of the programming—storylines, action, imagery—stimulates brain activity and alertness. And the duration of a binge-watch session creates enough pre-sleep arousal to interfere with our ability to fall asleep. Watching back-to-back episodes of your current favorite show may feel like a relaxing escape at the end of the day, but it’s actually getting your brain fired up, not helping it wind down.

Binge watching is a relatively new phenomenon, and scientific findings about its effects on sleep and other aspects of mental and physical health are just beginning to arrive. Recent research links binge-watching to feelings of loneliness, as well as depression and anxiety. A new study out of the United Kingdom shows that nearly a third of UK adults and teenagers think binge-watching has caused them to miss out on sleep or feel tired.

There’s a longer history of research into the effects of TV watching—and plenty of evidence suggesting that too much of it is bad for sleep, as well as mental and physical well being. Watching more than two hours of TV on a daily basis is linked to several common sleep problems:

Excessive and prolonged TV watching is also linked to childhood and adult obesity, increased risk for type 2 diabetes, and depression.

Why do we binge watch?

Feeling a little bit less in the mood to settle in for three or four episodes of your current TV obsession? Wonder why we get so sucked into binging TV in the first place? The availability of so much programming right at our fingertips certainly makes binge watching easy to do, and makes us all a bit like kids in a candy store. Providers are awfully good at roping us in—the auto-play function that launches right into the next episode means we must take action in order to stop watching, instead of making the choice to continue.

Last spring, Netflix CEO Reed Hastings spoke to reporters about the competitive relationship between sleep and binge-watching—and its addicting qualities. “…when you watch a show from Netflix and you get addicted to it, you stay up at night…we’re competing with sleep, on the margin,” Hastings said.

The escapist pleasures (and thrills, laughs, and tears) of binge-watching can be addicting. Research shows people with lower levels of self-control are more likely to binge-watch, as are people who are depressed or lonely. In turn, excessive watching can increase feelings of isolation, lack of self-control, and low mood, creating a difficult, downward cycle. With the virtually endless amount of content now available, it’s even more important than ever to be aware of TV viewing as a habit to be managed with moderation and care, not unlike diet, drinking, and other lifestyle choices that impact health.

Tips to manage your TV viewing

To protect your sleep and your overall health, it’s a good idea to keep binge watching in check. There’s no reason not to relax and enjoy a program in the evening. Here are some steps you can take to make sure one episode doesn’t always turn into five:

Research suggests that streaming and binging TV is often a solitary pastime. The recent UK study found 45 percent of viewers watching TV alone on a daily basis—and 90 percent watching by themselves at least every week. A survey in the U.S. found more than half of respondents—56 percent—prefer to binge watch alone. With personal devices, shared accounts, and Wi-Fi throughout the house, the whole family can be at home together—and in different rooms watching different programs.

If you can manage it, it’s a good idea to watch with someone else. Your partner, your kids, your friends. You and your viewing partners can help keep each other in check—in groups, someone is more likely to step up, say, “enough,” and turn the TV off. Alone, we’re more likely to let binging impulses get the better of us.

This one might seem counterintuitive—light exposure at night isn’t good for sleep, right? I’m not suggesting you turn on every light in the house. But immersing yourself in a dark room to watch TV makes the screen—and its content—even more likely to be the sole, unbroken focus of your attention. With some light in the room, you’ll maintain a stronger connection to what else is happening around you. You’ll give yourself a chance to be distracted by something—a task you’ve been meaning to tend to, a conversation with your teenager you’ve been wanting to have, a book you’ve been thinking of reading. Those real-life distractions can help impose limits on your viewing.

I’m not talking about a four-hour stretch, either. Decide before you start how long you’ll watch. Give yourself some flexibility, just not without limits. Set a binge-watching cap of two or three episodes. If you’re not sure you’ll stick to your time limit (and you’re smart to wonder about this, because it’s hard), set a timer on your phone to remind yourself. Even better, make an appointment to do something after your viewing ends, such as call a friend on the phone. If you’ve decided on a longer viewing session, break it up in the middle with another activity.

We’ve got a tremendous amount to learn about the effects of new and changing viewing habits, including binging, on sleep and health. There’s no reason to cancel your streaming subscriptions—instead, set some reasonable, sustainable limits, and fully enjoy the time you spend watching as one of several ways you relax.