Can listening to music change your behavior for the better? 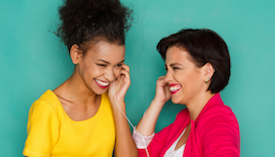 People in the United States spend an average of 32 hours listening to music each week, an increase of five and a half hours over last year. That’s a lot of time—more than ever before. Has this influenced your behavior or the behavior of those around you?

Some people certainly think it can have a negative impact—remember Tipper Gore’s crusade against swear words and “the indecent liberties some entertainers take with [our] children”? However, studies have also explored possible relationships between music and positive social behaviors.

In particular, research suggests that three aspects of music—its emotional resonance, its lyrical content, and its unique way of synchronizing groups of people—may have the power to invoke good deeds. Here’s a list of the research-tested ways music can have a positive impact on you and your world.

Sheryl Crow – If It Makes You Happy

We’ve all felt strong emotions listening to music. Sad songs may bring us to tears, while joyful music can make us feel euphoric. While melancholy music can move us in fascinating ways, there is power in that second category, too. Indeed, one way music may make us better people is by making us happier—and therefore more likely to give of ourselves.

In a study by Adrian North, Mark Tarrant, and David Hargreaves, over 600 users of a university gym listened to either uplifting, top-20 singles or annoying avant-garde computer music while they worked out. They were later asked either to sign a petition in support of a charity (an easy task) or to distribute leaflets for the charity (a more demanding task).

While almost all participants from both groups signed the petition, significantly more of the participants from the up-tempo music group agreed to help distribute leaflets, suggesting that some music may make you more willing to expend energy and time to help others.

Other research shows that there is a feedback loop between happiness and generosity—feeling happier makes people more likely to give and vice versa. So, while more studies are needed to confirm the relationship, the results from the gym study suggest not only that music may be a good way to make people feel happier but also that this increased happiness may make people more generous.

2.    Songs with “prosocial” lyrics may make you more helpful and empathic

Happy lyrics from upbeat songs may not have as much of an impact on people’s behavior as “prosocial” lyrics advocating kindness and helpfulness—think Michael Jackson’s “Heal the World.” While sometimes these lyrics may seem sappy or saccharine, they also may have the ability to change the way we think and act—at least in the short term.

When you tell someone to heal the world through song lyrics, it appears as if they’re actually more likely to try.

While both of these studies were limited in that they looked only at the short-term effect of listening to songs with positive lyrics, Greitemeyer suggests that repeated exposure to prosocial media might prove to have profound effects.

“Repeated encounters with prosocial media may yield long-term changes in personality through the development and construction of knowledge structures,” writes Greitemeyer. In other words, “when people may repeatedly listen to prosocial songs, the positive effects on prosocial behavior might be even more pronounced.”

3.    Listening to prosocial songs may change how you spend your money

The Beatles – Can’t Buy Me Love

In one experiment, almost 800 French restaurant customers ate lunch or dinner while listening to music with prosocial lyrics or music with neutral lyrics—or music not selected for its lyrical content. Restaurant patrons who had listened to the prosocial music were significantly more likely to leave a tip—and their tips were bigger than the others’.

However, a more recent study by Nicolas Ruth found that guests who visited a German café while listening to music with prosocial lyrics tipped the same amount as those who listened to songs with neutral lyrics. That said, Ruth observed a different positive behavior: Guests who listened to the prosocial lyrics were significantly more likely to buy organic fair trade coffee.

In his paper, Ruth suggests a couple of possibilities for why this experiment failed to see an increase in tipping: Maybe it’s because tipping is viewed differently in Germany, or perhaps the prosocial impulse led people to choose to support fair trade coffee farmers and the environment, when given the option.

4.    Song lyrics may change your attitude towards people different from you

Indeed, listening to these songs may make us less aggressive, more accepting of differences, and even—yes, for real—more likely to respect women.

A study by Ruth and colleagues, for example, found that participants who had listened to Bruno Mars’s “Count on Me”—a song with prosocial lyrics—had fewer aggressive thoughts (but not fewer aggressive feelings) compared to those who listened to Mars’s “The Lazy Song,” which is more neutral.

In a similar vein, another study by Greitemeyer and colleagues found that participants who had listened to songs with pro-equality lyrics—such as “Respect” by Aretha Franklin—showed evidence of more positive attitudes and behavior toward women compared to those who had listened to neutral lyrics.

It is important to note that these studies have limitations. Most used small numbers of college students as their participants, tested only a few songs, and looked only at short-term effects. Thus, it’s unclear whether these results are due to priming, which might affect short-term decisions without influencing how people see the world in general. Even so, it is possible that listening to more prosocial songs could lead to long-term changes in attitudes and behavior for the better.

5.    Making and moving to music may boost cooperation and connection

It’s not just listening to music that can change our behavior for the better—moving to music helps, too. But it’s not the movement of dancing itself that inspires kindness and helpfulness (although it might contribute). Instead, it’s the way music helps to synchronize us with other people.

There are several studies that suggest dancing to music with others (as well as jointly making or listening to music) can boost prosocial behavior. In one study by Sebastian Kirschner and Michael Tomasello, four-year-old children behaved more cooperatively and prosocially after making music together compared to children who were engaged in another activity with similar levels of social and linguistic interaction.

Another study by Laura Cirelli, Stephanie Wan, and Laurel Trainor found that even younger children—14-month-olds—were significantly more likely to help an experimenter after bouncing synchronously with her to the Beatles song “Twist and Shout” than after bouncing asynchronously (an effect achieved by the experimenter listening to a sped-up track on headphones).

This increased cooperation isn’t limited to children. Studies have found that adults who did synchronous singing cooperated more in an economic game, and that people who participated in synchronized drumming were more likely than others to pick up pencils for an experimenter who had dropped them.

A recent study by Jan Stupacher and colleagues suggests that just viewing synchronized movements can influence how we see others. In this study, adult participants watched videos of two people figures walking side by side and imagined that they were one of the people. When music accompanied the videos, participants were more inclined to see the two figures as close and they liked the other one better, compared to when a metronome or silence accompanied the video. Why? Perhaps the music made them happier (as in the gym experiment), suggest the researchers—or maybe music plays a unique role in social bonding.

Interestingly, messing with the synchrony between the music and the figures changed people’s impressions. In some versions of the experiment, the two figures moved out of sync with one another. When the other figure was moving out of phase with the music, but the figure the participant was pretending to be was moving in phase, participants rated the other figure as less likeable compared to the opposite situation (other-figure in phase and self-figure out of phase). Could this mean that moving to the beat could help you find a new friend at a party? Further research is needed.

So, music can do plenty of good, it seems—but can it really “Heal the World?” It’s hard to say, given that research into the prosocial impacts of music is still in its infancy. But this smattering of studies suggests that there are ways music may indeed help.