New research is exploring how phubbing—ignoring someone in favor of our mobile phone—hurts our relationships, and what we can do about it. 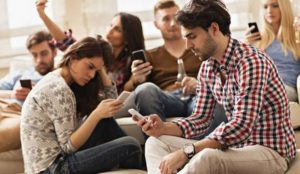 Phubbing is the practice of snubbing others in favor of our mobile phones. We’ve all been there, as either victim or perpetrator. We may no longer even notice when we’ve been phubbed (or are phubbing), it has become such a normal part of life. However, research studies are revealing the profound impact phubbing can have on our relationships and well-being.

There’s an irony in phubbing. When we’re staring at our phones, we’re often connecting with someone on social media or through texting. Sometimes, we’re flipping through our pictures the way we once turned the pages of photo albums, remembering moments with people we love. Unfortunately, however, this can severely disrupt our actual, present-moment, in-person relationships, which also tend to be our most important ones.

The research shows that phubbing isn’t harmless—but the studies to date also point the way to a healthier relationship with our phones and with each other.

What phubbing does to us

In a study poignantly titled, “My life has become a major distraction from my cell phone,” Meredith David and James Roberts suggest that phubbing can lead to a decline in one of the most important relationships we can have as an adult: the one with our life partner.

Phubbing also shapes our casual friendships. Not surprisingly to anyone who has been phubbed, phone users are generally seen as less polite and attentive. Let’s not forget that we are extremely attuned to people. When someone’s eyes wander, we intuitively know what brain studies also show: The mind is wandering. We feel unheard, disrespected, disregarded.

A set of studies actually showed that just having a phone out and present during a conversation (say, on the table between you) interferes with your sense of connection to the other person, the feelings of closeness experienced, and the quality of the conversation. This phenomenon is especially the case during meaningful conversations—you lose the opportunity for true and authentic connection to another person, the core tenet of any friendship or relationship.

In fact, many of the problems with mobile interaction relate to distraction from the physical presence of other people. According to these studies, conversations with no smartphones present are rated as significantly higher-quality than those with smartphones around, regardless of people’s age, ethnicity, gender, or mood. We feel more empathy when smartphones are put away.

This makes sense. When we are on our phones, we are not looking at other people and not reading their facial expressions (tears in their eyes, frowns, smiles). We don’t hear the nuances in their tone of voice (was it shaky with anxiety?), or notice their body posture (slumped and sad? or excited and enthusiastic?).

The way of the phubbed

What do “phubbed” people tend to do?

According to a study published in March of this year, they themselves start to turn to social media. Presumably, they do so to seek inclusion. They may turn to their cell phone to distract themselves from the very painful feelings of being socially neglected. We know from brain-imaging research that being excluded registers as actual physical pain in the brain. Phubbed people in turn become more likely to attach themselves to their phones in unhealthy ways, thereby increasing their own feelings of stress and depression.

A Facebook study shows that how we interact on Facebook affects whether it makes us feel good or bad. When we use social media just to passively view others’ posts, our happiness decreases. Another study showed that social media actually makes us more lonely.

“It is ironic that cell phones, originally designed as a communication tool, may actually hinder rather than foster interpersonal connectedness,” write David and Roberts in their study “Phubbed and Alone.” Their results suggest the creation of a vicious circle: A phubbed individual turns to social media and their compulsive behavior presumably leads them to phub others—perpetuating and normalizing the practice and problem of “phubbing.”

Why do people get into the phubbing habit in the first place? Not surprisingly, fear of missing out and lack of self-control predict phubbing. However, the most important predictor is addiction—to social media, to the cell phone, and to the Internet. Internet addiction has similar brain correlates to physiological forms like addiction to heroine and other recreational drugs. The impact of this addiction is particularly worrisome for children whose brain and social skills are still under development.

Nicholas Kardaras, former Stony Brook Medicine clinical professor and author of Glow Kids, goes so far as to liken screen time to digital cocaine. Consider this: The urge to check social media is stronger than the urge for sex, according to research by Chicago University’s Wilhelm Hoffman.

These findings come as no surprise—decades of research have shown that our greatest need after food and shelter is for positive social connections with other people. We are profoundly social people for whom connection and a sense of belonging are crucial for health and happiness. (In fact, lack thereof is worse for you than smoking, high blood pressure, and obesity.) So, we err sometimes. We look for connection on social media at the cost of face-to-face opportunities for true intimacy.

How to stop phubbing people

To prevent phubbing, awareness is the only solution. Know that what drives you and others is to connect and to belong. While you may not be able to control the behavior of others, you yourself have opportunities to model something different.

Research by Barbara Fredrickson, beautifully described in her book Love 2.0, suggests that intimacy happens in micro-moments: talking over breakfast, the exchange with the UPS guy, the smile of a child. The key is to be present and mindful. A revealing study showed that we are happiest when we are present, no matter what we are doing. Can we be present with the person in front of us right now, no matter who it is?

Studies by Paula Niedenthal reveal that the most essential and intimate form of connection is eye contact. Yet social media is primarily verbal. Research conducted by scientists like the GGSC’s Dacher Keltner and others have shown that posture and the most minute facial expressions (the tightening of our lips, the crow’s feet of smiling eyes, upturned eyebrows in sympathy or apology) communicate more than our words.

Most importantly, they are at the root of empathy—the ability to sense what another person is feeling—which is so critical to authentic human connection. Research shows that altruism and compassion also make us happier and healthier, and can even lengthen our lives. True connection thrives on presence, openness, observation, compassion, and, as Brené Brown has so beautifully shared in her TED talk and her bestselling book Daring Greatly, vulnerability. It takes courage to connect with another person authentically, yet it is also the key to fulfillment.

What to do if you are phubbed

What if you are phubbed? Patience and compassion are key here. Understand that the phubber is probably not doing it with malicious intent, but rather is following an impulse (sometimes irresistible) to connect. Just like you or I, their goal is not to exclude. To the contrary, they are looking for a feeling of inclusion. After all, a telling sociological study shows that loneliness is rising at an alarming rate in our society.

What’s more, age and gender play a role in people’s reactions to phubbing. According to studies, older participants and women advocate for more restricted phone use in most social situations. Men differ from women in that they viewed phone calls as more appropriate in virtually all environments including—and this is quite shocking—intimate settings. Similarly, in classrooms, male students find phubbing far less disturbing than their female counterparts.

Perhaps even worse than disconnecting from others, however, Internet addiction and phubbing disconnect us from ourselves. Plunged into a virtual world, we hunch over a screen, strain our eyes unnecessarily, and tune out completely from our own needs—for sleep, exercise, even food. A disturbing study indicates that for every minute we spend online for leisure, we’re not just compromising our relationships, we are also losing precious self-care time (e.g., sleep, household activities) and productivity.

So, the next time you’re with another human and you feel tempted to pull out your phone—stop. Put it away. Look them in the eyes, and listen to what they have to say. Do it for them, do it for yourself, do it to make the world a better place.