Best to Leave Fireworks to the Experts 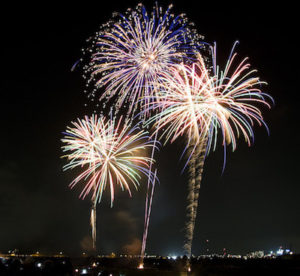 Summer is synonymous with barbecues, parades and fireworks displays. But along with all the festivities are plenty of visits to emergency rooms – especially during July.

In 2013, eight people died and about 11,400 were injured badly enough to require medical treatment after fireworks-related incidents, according to the U.S. Consumer Product Safety Commission. And while the majority of these incidents were due to amateurs attempting to use professional-grade, homemade or other illegal fireworks or explosives, 40 percent were from legal, less powerful devices.

Fireworks also are responsible for thousands of home fires each year. The National Fire Protection Association reports that in 2011, fireworks caused about 1,200 structure fires.

The National Safety Council advises everyone to stay away from all consumer fireworks and to only enjoy fireworks at a public display conducted by seasoned professionals.

Following are some fireworks that are legal for consumers to purchase and use in some states. But just because they are legal doesn’t mean they’re safe. Check out this video by the NFPA.

Every year, young children can be found along parade routes and at festivals with sparklers in hand, but they are a lot more dangerous than most people think. Parents don’t realize they burn at about 2,000 degrees – hot enough to melt some metals. Sparklers can quickly ignite clothing, and many children have received severe burns from dropping sparklers on their feet.

These small rockets are attached to a stick, lit by a fuse and typically fired from a bottle. Teens have been known to have bottle rocket wars, firing them at one another and causing chest, head and eye injuries.

Physicians at Vanderbilt Eye Institute at Vanderbilt University Medical Center have seen so many eye injuries caused by bottle rockets they conducted a study they hope will lead to better education and “legislative enhancements” on fireworks safety.

“The majority of the children (in the study) ended up with reduced vision, and probably half of those were deemed legally blind,” said Dr. Franco Recchia, associate professor of ophthalmology and visual sciences at Vanderbilt.

Firecrackers are designed to explode on the ground. They are often linked together by one long fuse and explode in a series. They are designed to be very noisy, but they also can cause burns and other serious injuries.

Roman candles eject multiple exploding shells from a tube the user holds in his or her hand. There have been numerous reports of children losing fingers, severe burns and other injuries, which are sometimes caused when the device gets jammed.

You hear them go off every year: M-80s, M-100s, even M-250s. The unmistakable explosions associated with these devices can rattle the windows of homes for blocks. They are produced illegally and without quality control, have short fuses and cause hundreds of extremely severe injuries each year.

The U.S. Bureau of Alcohol, Tobacco, Firearms and Explosives outlines the risks of these explosive devices.

If fireworks are legal to buy where you live and you choose to use them, be sure to follow the following safety tips:

Better yet, grab a blanket and a patch of lawn, kick back and let the experts handle the show.