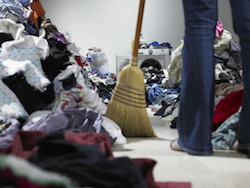 You forget about the noise, the constant thud of sneakered feet, the slamming of doors for no reason at all, simply as a statement of late adolescence. Also, the clutter. Alps of clutter. You forget about the dishes, the relentless congestion in the sink, because why commit to one glass when you can use them all?

And the towels. You definitely forget about the towels, a spa’s worth festooning the bathroom, the banister, the hall. Suddenly, damp terry cloth is the dominant design treatment of the second floor.

If you can find the floor.

The kids left for college, first he, then she. The house somehow grew bigger, grander, older, noticeably older and hence quieter, often frighteningly so.

The house also became cleaner, nicer and somewhat smarter. Stuff tended to stay put. Keys didn’t travel off-trail. There was a bit of magic and grace in finding objects precisely where they had been originally placed.

Now, every morning brings the fresh possibility of mystery and its frenetic twin, panic. At any moment, something, anything, may go AWOL for hours, or longer. (If you find the second car key, kindly e-mail me at the address below.)

During the school year, food shopping had become a lark. Milk shrank from gallons to pints, then spoiled from lack of interest. The refrigerator became a science experiment on the hazards of occasional neglect. The dishwasher grew quiet for days. Laundry became so random as to qualify as an event.

Dinner had transformed into a movable feast — smaller, later, a camping expedition into other rooms. It had become a delightful experience, not some failed peace agreement.

Cooking, it turns out, can be fun and emotionally rewarding — if people actually eat the prepared meal, rather than believing that the kitchen doubles as a short-order counter.

We had forgotten — oh, the many things we had forgotten — that our son likes tomato sauce, but not tomatoes, and that certain textures and temperatures leave him queasy. As a young child, he had declared, “I’m a hot-food kid, not a cold-food kid,” and had stuck to that declaration like a gustatory Bill of Rights.

Also, that logic tended to fly right out the window. We had forgotten that the daughter dislikes shrimp and rice, though not sushi, and had declared war against risotto. I happen to make a lovely risotto. With shrimp.

And that while they both love pasta, they don’t love the same pasta because, you know, that might make things easy.

It has been scientifically proved that adolescents will collapse and die a most wretched death if they don’t eat every few hours.

True. You can look it up.

So, snacks disappear in seemingly minutes. (Provided they do not involve tomatoes or rice or shrimp.) The cupboard — the other one, not the one denuded of clean glasses — is always bare from constant pursuit of post-lunch and pre-dinner grub. Magically, the friends reappear, like the swallows to San Juan Capistrano — welcome back, friends, we missed you, too! — but very hungry friends who Must Have Snacks. Also, now that they’re college students, beer.

Consequently, we shop daily for food, like Europeans — that is, if Europeans had a pronounced taste for tortilla chips, guacamole and cookies.

Scientists have also proved — I read it in the New England Journal of Medicine or some mom blog — that children of all ages, but especially older ones who are on to you, have taken a solemn oath to a secret society that renounces leftovers as a gastronomic crime against humanity.

Children view leftovers as “used food” and aren’t going there, even though every home cook knows that nothing tastes better after a long Monday than reheating Sunday’s repast.

We had forgotten that, too.

That is because we had done what so many parents do and simply engaged in optimistic amnesia. We had remembered only the joy.

Now, the dishwasher, filled with every possible glass, is in constant use. The washer and dryer as well. And the towels, more towels than we believed we owned.

We are Bath Bath and Beyond. (You can’t find the “Bed” for the bath towels.)

The house is alive and humming with rattle and mess and friends and so much stuff and snacks.

It’s so great to have them home.