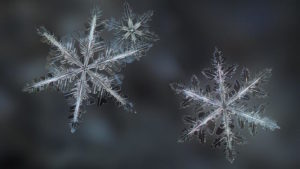 A snowflake is a group of snow crystals that are stuck together. Many believe that snowflakes are simply frozen rain drops but this is not true. Snow crystals, which make up snowflakes, form from frozen vapor in the clouds, while frozen raindrops are sleet. The smallest snowflakes are referred to as diamond dust crystals and can be as small as human hair in diameter. These tend to appear more often in extremely bitterly cold climates. The largest snowflakes can be as big as a penny. It is estimated that approximately 1 million billion snowflakes fall every second on earth.