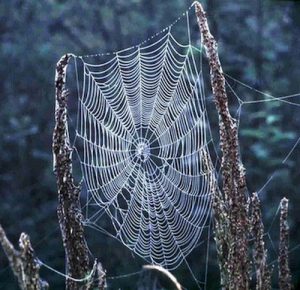 Spider webs are built from silk, which is produced within the body of the spider and pulled out of two openings–spinnerets–with the spider’s hind legs.

All spiders have two claws on their feet, but web-spinning spiders have three. They are used not only to pull the silk but also to grip and release the web’s threads and provide traction as they move along the web.

The web is constructed so that if any part of it is disturbed, a reaction is felt across the entire web, alerting the spider to its trapped and struggling insect food.

In addition, it is constructed so that failure in one area will not cause the entire web to fail, but will forfeit only the failing section.

Spiders rebuild their webs by eating the silk then “recycling” it to make new webs.

Webs have multiple purposes, but the most important one is to trap insects for food.

It is the female spider who builds the webs.

Spider webs can prove to be useful indicators of environmental chemistry. For example, researchers were able to deduce levels of lead and zinc in limestone arches in caves in Australia based on analysis of water-soluble ions in spiderwebs at the sites.

There are three main types of webs: orb webs, funnel or sheet webs, and the irregular webs of house spiders.

There are about 35,000 known spider species, although scientists estimate that there may be about 180,000 species in the world. About 2,000 of these inhabit the U.S., but only a few of those spider species build elaborate webs. There are three spiders venomous to humans commonly found in some parts of the U.S.–the black widow, the brown recluse, and the hoho spider.