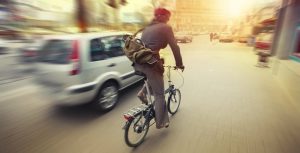 Cyclists Have Road Rights, and Responsibilities

Bicyclists may feel they don’t have a fighting chance on the road, much less any friends riding in 4-ton steel cabins atop four wheels. Media reports tend to dwell on unpleasantries between motorists and bicyclists, notably road rage incidents. Nevertheless, safety experts say, it is possible for bicyclists and drivers to peacefully coexist.

We have a set of tips for drivers. But Edmunds.com also asked safety experts — a bicycling advocate, bicycling-accident attorneys and a representative from the National Motorists Association — to give us their best tips for what bicyclists can do both to keep the peace with motorists and enjoy their rides.

Here, then, are the 10 best rules of the road for bicycling near cars.

It sounds basic, but to ride safely, your bike must be in good working order, says Andy Clarke, president of the League of American Bicyclists. Clarke tells riders to check the brakes to ensure they are working, along with inspecting the chain and gears. If you have a quick-release lever for your wheel, ”make sure it is tight and [that] the wheel will stay on,” he says. Inspect the bike before heading out to be sure nothing is loose or falling off, Clarke says. If you don’t have to worry about wayward bike parts, you can focus better on the traffic, he says.

Follow the Rules of the Road — All of Them

“You have the same rights and responsibilities as drivers,” Clarke says. That means bicyclists must stop for traffic signals and stop signs. Bicyclists should ride with the flow of traffic.

Look up the specific rules for your state. You can usually find them at the website of your state’s motor vehicle department. Helmet laws vary from state to state, and sometimes they only apply to cyclists in their teens or younger. Also, some communities have their own requirements.

Bicyclists should remember that they can be held liable in traffic mishaps, says Bob Mionske, a Portland cycling attorney and avid cyclist. Suppose you cut a motorist off and he crashes. Don’t be surprised if the driver comes after you, he says.

Observing the basic speed laws is important, Mionske says. “It’s possible to speed, especially downhill.” On San Francisco hills, for instance, he says a bicyclist can travel at carlike speeds. When passing motorists, do so in a straight line and make your move smoothly, Mionske says. Otherwise, you may startle them into doing something unsafe — like steering into you.

Think of Yourself as Invisible

“Assume you are invisible to every car on the road,” Bowman says. Thinking this way, he says, can lead a cyclist to think more actively about steps to take for greater safety, such as equipping their bike with reflectors. Some cyclists also make a practice of wearing bright, eye-catching clothing or reflective safety vests. Clarke says a bicycle should be equipped with a front light, rear light and reflectors. “Pedal reflectors are good because they are in motion.”

Cyclists also should make an effort always to stay out of a vehicle’s blind spot, Mionske says. Try to make eye contact with a driver that’s within your view, says Clarke. You’re visually confirming that the driver knows you’re there, and vice versa, he says.

Many car-bike collisions occur when a bicyclist does something the motorist doesn’t expect, such as darting up to an intersection and going straight when it looked to the driver as if the cyclist would turn right, safety gurus say. “Be as predictable as possible,” Clarke says. Signal your turns and stops. The League has riding tips on its site. It advises cyclists to indicate their intent to stop by putting their left arm out and down, palm to the rear. To signal a turn, cyclists should extend their left or right arm straight out.

Be Aware of Common Hazards

Veteran bicyclists know about the accident called “being doored,” says Gary Brustin, a bicycling accident attorney in Santa Monica and San Jose, California. As the name implies, a cyclist is pedaling along, doesn’t notice a motorist getting out of a parked car, and is thrown, sometimes violently, when he or she hits the opening door. “Try to ride a little more to the left if there are lots of parked cars,” Brustin says. He also suggests that riders slow down and keep an eye out for people who may be in cars. Even though cyclists are right under the law to ride alongside the parked cars, they don’t want to be “dead right,” he says.

Railroad tracks are another potential hazard. “It’s easy to catch wheels in railroad tracks,” Clarke says. “To avoid that, cross as close to a 90-degree angle as you can. Sometimes that will mean you have to check behind you, to see if you can pull out in the traffic lane safely.”

Yes, more and more communities have bike lanes, encourage bike commuting and in general are more bike-friendly. But that atmosphere can give bicyclists a false sense of security, Bowman says. They tend to let their guard down and possibly skimp on safety. Even in bike-friendly environs, you have to watch out for cars — and other bicyclists.

Disengage From the Rage

Road rage against bicyclists is, unfortunately, still with us, says Brustin. Don’t react to angry driver behavior, he says. If you yell back or gesture, a driver just might confront you, he says. A better plan is to “try to get a good look at the person,” he says. And although this is easier said than done, try to get the driver’s license plate number, Brustin says. “Say nothing,” Brustin says. “Get off the road.” He suggests pulling into a parking lot or other safe place.

If you sense immediate danger, Brustin advises calling 911 and telling the emergency operator the story: That a motorist came too close, was rude and threatening and that you are frightened.

“Don’t blame one motorist for what another one did,” Mionske says. Carrying a chip on your shoulder while riding can set a cyclist up for a kind of post-traumatic stress disorder, Mionske says. After too many close calls, and not letting go of bad attitudes of previous drivers, your adrenaline may always be up, he says. That can’t be good for maintaining health or avoiding confrontations.

Keep Your Rights in Perspective

Brustin and others advocate a ”real-world” view. If you always follow the letter of the law, you may be causing trouble for yourself, Brustin says. For instance: “You have the right to go through that intersection at a reasonable speed,” he says. But if traffic is heavy or the road is wet or a traffic jam surrounds you, slowing down is the thing to do. Again, you don’t want to be “dead right,” cycling safety experts say.

Be a Goodwill Ambassador for Bicycling

This may sound corny, but it could be very productive, Brustin says. Being an ambassador for good bicycling requires that you respect the law at all times, understand the motorist’s point of view and make a conscious effort to improve the image of bicyclists.

Mionske is onboard with this idea. When a motorist yields to him, he doesn’t ignore the good manners. “I thank people for their courtesy,” he says. “I wave at them.” As goodwill builds from good bicyclist behavior, the vibes on the roadway may just change. “Eventually motorists, instead of despising us, will treat us with equality,” Brustin says.