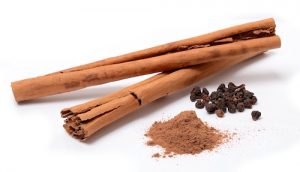 Research on cinnamon is still ongoing, and while preliminary research is promising, more well-designed human trials still need to be completed. There are, however, a few health benefits that seem particularly promising (and it certainly doesn’t hurt to season up your food with this spice). From diabetes to pain management, an extra dash of cinnamon may be part of a plan to fight these common problems.

To help us sort myth from fact, we’ve enlisted the help of several health experts to give us their two cents on one of our favorite spices. We’ve vetted each claim, scouring the latest research to bring you the most complete guide to cinnamon’s health benefits.

Cinnamon As Medicine Through History

Cinnamon has been used as a medicine in traditional Ayurvedic and Chinese medicine for centuries. Known for its benefits linked to digestion and gastrointestinal complaints, cinnamon has long been used as a home remedy for heartburn, indigestion, and nausea.

In a 2011 systematic research review, dozens of “folkloric” benefits of cinnamon, from acne to premature ejaculation (and even possible uses as a snake repellant) were highlighted; many of these have yet to be confirmed by modern science.

What You Need to Know

Scientific research is complex and constantly changing. To prove the benefits of any supplement, medicine, or food, researchers undertake a process that can go on for years, testing first in lab conditions followed by in animals. Only once human trials have confirmed alleged benefits can they truly be considered to be proven.

This is problematic given the “clickbait” trends of modern media today. Research that is far from conclusive will often be touted as fact.

At Organic Authority, we distill ongoing research, exploring both the clinically proven benefits and the promising, if not yet conclusive, studies. We update our guides periodically in order to ensure that you always have access to the latest research out there.

Many of cinnamon’s fantastic properties come from one substance, something called cinnamaldehyde, which is naturally present in cinnamon. According to Carina Parikh, MScN, MSiMR, the holistic nutritionist for Kate Naumes ND Holistic Wellness in Dallas, cinnamaldehyde is the source many of the antifungal and antibacterial properties that make cinnamon such a great addition to your diet.

Perhaps the most promising research pointing to the health benefits of cinnamon is linked to type 2 diabetes. While there is certainly no cure for this metabolic disease, cinnamon can be an important tool in managing its symptoms.

According to Lori Kenyon Farley, a Certified Nutrition Consultant specializing in wellness, fitness and anti-aging and one of the experts behind Project Juice, cinnamon can help manage this disease in two different ways. “It can reduce blood pressure and have a positive effect on blood markers for those with Type 2 diabetes,” she explains. Cinnamon can also reduce insulin resistance, which, Farley explains, “has been shown to lower fasting blood sugar levels by up to 29%, which can reduce the instance of Type 2 diabetes.”

Shane Ellison, MS, a medicinal chemist and founder of the Sugar Detox, explains how exactly this works. “(Cinnamon) works directly on the muscle cells to force them to remove sugar from the bloodstream, where it is converted to energy,” he says. “It’s even shown to work better than most prescription meds.”

The key is in increasing insulin sensitivity in the body, a sensitivity that, while present at birth for those without type 1 diabetes, slowly decreases as we age and consume more sugar. As a result, sugar floats around in the blood, causing diabetes and other health problems. “Cinnamon, which is completely non-toxic, repairs the receptors so they are once again responsive to insulin,” Ellison explains. “In time, sugar levels normalize due to an increase in insulin sensitivity.”

Several studies have highlighted these possible benefits, including one 2016 research review that found that cinnamon supplements, in conjunction with standard hypoglycemic medications, had “modest effects” on Fasting Plasma Glucose and HbA1c, though the authors noted that “larger and more rigorous” studies were necessary.

It’s perhaps no surprise that if cinnamon has possible beneficial effects on type 2 diabetes, it would also be helpful in the management of metabolic disease. One 2016 literature review found that cinnamon could be effective in reducing complications, morbidity, and mortality in metabolic syndrome, including reducing blood pressure, plasma glucose, obesity, and dyslipidemia. But while these possible results of consuming cinnamon are certainly promising, more well-designed subject trials are necessary before true conclusions can be drawn.

Cinnamon can also be used as an appetite suppressant to those with a sugar addiction, thanks to its naturally sweet taste.

Cinnamon could lower your bad cholesterol (or LDL).

Even if you do not suffer from diabetes or metabolic syndrome, you may want to include cinnamon in your diet for many of the same reasons as those who do.

As Parikh explains, the positive impact on Type 2 diabetes symptoms is due to a number of factors, notably “improving serum glucose, lowering fasting blood glucose, and reducing triglycerides, LDL cholesterol, and total cholesterol.” These are all benefits that can help even those not suffering from diabetes, including those with hereditary cholesterol worries or problems.

And that’s not all. “Regular intake of cinnamon may also help to mitigate the effects of high-fat meals by slowing the increase in blood sugar post-meal,” says Parikh. This means that when cinnamon is added to your diet, the effects of occasional high-fat choices may not be quite as detrimental to your health as they would otherwise be.

But while one 2013 research review found a promising link between cinnamon and lowered cholesterol, studies thus far have been small and show conflicting results. More research is necessary to prove these benefits conclusively.

Cinnamon has been proven to fight fungal, bacterial, and viral elements in foods: It’s no surprise that in the Middle Ages, when food spoilage was far more frequent due to lack of refrigeration, many recipes, both sweet and savory, were flavored with the spice.

Denise Baron, a wellness educator and director of Ayurveda for Modern Living explains that cinnamon can help with all sorts of lung congestion issues. “It helps clear up mucus and encourages circulation,” she explains, thus lending its powers to everything from a simple seasonal cough to bronchitis, when used in tandem with other remedies.

These benefits were highlighted in a research review, which pointed to evidence that cinnamon can inhibit bacteria by damaging cell membranes and altering their lipid profile, among other means. But while preliminary results are promising, more well-designed trials are necessary before conclusive benefits can be proven.

Cinnamon’s antimicrobial properties extend to viruses, thus indicating that it may help fight or manage HIV.

“Research shows that cinnamon extract may help fight the HIV virus by preventing the virus from entering cells,” says Parikh. “Therefore, cinnamon extract could potentially contribute to the management of HIV.”

A 2016 study in peer-reviewed PLoS One found that a cinnamon-derived substance could block viral entry, which the study notes is one of the most promising approaches to preventing HIV’s development into AIDS. More human trials are necessary to prove this benefit conclusively.

Similarly, cinnamon’s anti-microbial properties extend to fungi, thus rendering it a promising treatment for candidiasis. According to a 2011 research review, while cinnamon was shown to have activity against Candida in in-vitro studies, human trials, including a pilot study in five HIV-positive patients with oral candidiasis, showed mixed results. Further clinical trials are necessary to prove these benefits conclusively.

Cinnamon can help treat the symptoms of Alzheimer’s and Parkinson’s.

Alzheimer’s and Parkinson’s diseases are two neurological conditions that, for the moment, are incurable. An enormous part of treating these diseases is therefore in symptom management, and this can be boosted with the addition of cinnamon to a regular regime.

“Cinnamon has been shown to help neurons and improve motor function in those suffering from Alzheimer’s or Parkinson’s,” explains Farley. These contributions can help sufferers of these two diseases continue their regular routines with far less impediment.

The researchers did, however, note that further molecular and translational research studies, not to mention clinical trials, would be necessary in order to prove these benefits conclusively.

Cinnamon may have anti-carcinogenic properties.

“Evidence suggests that cinnamon may have anti-carcinogenic effects as well, although the research thus far is limited to animal studies,” she says. “These experiments demonstrate that cinnamon extract slows the growth of cancer cells and induces cancerous cell death.”

A 2011 research review highlighted preliminary evidence of cinnamon’s positive benefits on both lung cancer and stomach cancer, noting however that “well-designed trials are needed before a firm conclusion can be made.

It is possible that the consumption of cinnamon could reduce both systemic and specific inflammation, though more human trials are needed in order to render these possible benefits conclusive. The former is particularly important in the Western world, according to Parekh.

Specific inflammation reduction means that consumption of cinnamon could help treat certain types of pain and headaches, as well as arthritis pain. It plays a double role in this particular type of pain, according to Baron, as cinnamon can also boost circulation. “With circulation problems such as Raynaud’s syndrome or arthritis, this helps stimulate and push circulation to the joints,” she explains.

Polycystic ovarian syndrome is a problem with numerous symptoms that need to be managed, and cinnamon may be a key element of this management due to a number of characteristics.

First would be the management of insulin resistance in women with PCOS, which can contribute to weight gain.

“Cinnamon can also help mitigate heavy menstrual bleeding associated with common conditions of female health, such as endometriosis, menorrhagia, and uterine fibroids,” she continues. A clinical trial testing these benefits is currently ongoing.

“Cinnamon’s high concentration of antioxidants can help protect the body from damage from free radicals and reduce inflammation, reducing risk of cancer and other diseases,” explains Farley.

More human trials are needed to prove this benefit conclusively.

Cinnamon can help your eyes.

Some studies have shown that cinnamon, when used in conjunction with other herbs, may be useful in the treatment of eye disorders including conjunctivitis and dry eye. An evaluation of the OphtaCare brand, which features cinnamon and turmeric, among other ingredients, found that the preparation could be useful in the treatment of these and other eye disorders, but a 2011 research review noted that more research would be necessary in order to prove these benefits conclusively.

Cinnamon is a natural insect repellent.

Anecdotal evidence points to cinnamon as a natural insect repellent, and a 2013 study in the Journal of Medicinal Entomology found that cinnamon essential oil, in addition to eucalyptus and star anise, could indeed be natural insect repellents, specifically with regards to certain mites. The study authors, however, noted that the oils’ benefits “merit further study.”

It’s possible we’re just brushing the surface here. After all, Chinese medicine and Ayurveda have long revered cinnamon for its near superpowers, using it to treat things such as colds, indigestion and cramps, not to mention for its anti-clotting properties as well as attributes for cognitive function and memory. These societies also believed cinnamon could improve energy, vitality and circulation. It’s no wonder we’ve dubbed it a superfood!