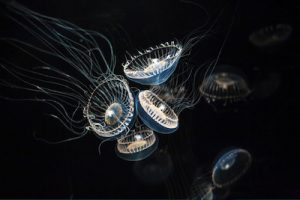 Jellyfish are among the most fascinating (and unique-looking) creatures of the sea! Did you know that these ancient invertebrates have been around long before dinosaurs roamed the Earth—more than 500 million years ago? Even though jellyfish have one of the most basic nervous system in a multicellular organism, they are able to produce toxic venom, emit light and may even hold the secrets to immortality (perhaps Voldemort should have looked into this?).

But there are many misconceptions surrounding jellyfish, finding that even my own basic knowledge comes only from a completely healthy dose of Spongebob episodes (did anyone else notice that they’re pretty much underwater bees?). But alas, Spongebob is an unreliable source to turn to for jellyfish information. So, in my pursuit for non-animated, accurate jellyfish facts, I’ve compiled a tidy list of all those questions that have kept you up at night.

NOPE! Jellyfish are an animal in the Phylum Cnidaria and the Subphylum Medusozoa. While they are popularly called “jellyfish,” many marine biologists prefer the terms “jelly” or “sea jelly” to avoid confusion. But given that it is World Jellyfish Day, I’ll be sticking with the traditional usage.

Are jellyfish poisonous to humans?

All jellyfish produce toxins with varying levels of “stings.” Only about 2% of jellyfish toxins are seriously harmful to humans.

What is the deadliest jellyfish in the world?

One of the deadliest jellyfish in the world is the Box Jellyfish. Found primarily off the coast of northern Australia and in the Indo-Pacific, the Box Jellyfish can have 24 eyes and 15 tentacles that can reach up to three meters (10 feet) in length. Other jellyfish with powerful venom include the Irukandji, Portuguese Man o’ War, Lion’s Mane, and Sea Nettle jellyfish.

How can a jellyfish kill you?

There are about 50 species of jellyfish that have tentacles covered in cnidocytes (basically a cell that explodes when touched). Each cnidocyt contains a tiny dart with poison that, once it pierces the skin, enters the blood causing a dangerous spike in blood pressure that can stop the heart. The U.S. National Science Foundation reports that around 20 to 40 people die each year from box jellyfish stings in the Philippines. Worldwide fatalities from jellyfish are unknown due to some countries’ lack of a death certificate requirement.

Can a jellyfish live forever?

The life span of jellyfish varies among species, with some only living a few days, others to a year, and a few up to 20 years. There is one species of jellyfish, the Turritopsis dohrnii, that has been dubbed ‘immortal.’ This jellyfish can reprogram the identity of its cells, essentially rewinding its life cycle. When the jellyfish is old, sick, or facing danger, its survival mechanism allows it to become a younger version of itself.

Is it okay to pee on a jellyfish sting?

No matter what you’ve seen on Friends, do not urinate on a jellyfish sting! Jellyfish stings should NOT be cleaned with freshwater (which urine contains) as it will not alleviate any burn and may in fact cause increased pain. As soon as you get stung, leave the water and carefully remove any remaining tentacles without making additional skin contact. To alleviate a burn, try vinegar or a baking soda paste, and if you continue to feel ill, please see a doctor.

What good do jellyfish do?

Jellyfish are crucial to ocean health. They keep prey like zooplankton and small fish populations in check by paralyzing them with their tentacles and gobbling them up. Jellyfish also transport carbon to greater ocean depths, enhancing biodiversity and contributing to medical advances.

Jellyfish don’t feel pain in the same way that humans would. They do not possess a brain, heart, bones, nor a respiratory system. They are 95% water and contain only a basic network of neurons that allow them to sense their environment.

Can jellyfish glow in the dark?

Some jellyfish have bioluminescent organs which enable them to emit light. This is believed to be primarily used as a defense mechanism to distract predators, but can be used to attract prey or for intraspecific communication

No, no they are not (though they can look like flying saucers in a dimly lit ocean).

While there are plenty more questions that we can ask about jellyfish, there is still much information about how these organisms operate that is unknown. It is our hope that this will at least bring you a small step closer towards understanding the countless jellyfish that roam the sea.