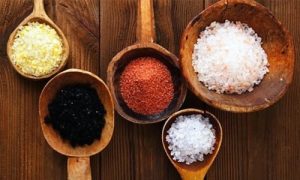 Salt is now available in a variety of colors and textures said to improve your cooking experience. There are also claims suggesting that some salts are healthier than others. The growing popularity of differing salts, like Pink Himalayan, has inflated the costs because these claims are believed.

Somehow, a different color and texture are supposed to make all the difference when cooking with these specialty salts. Are they really better and worth the money? Are increased health benefits provided using a certain salt?

Understanding what salt is and how it functions in your body will help answer these questions.

Salt is a mineral made from the combined elements sodium and chlorine. Together, they form sodium chloride, a crystallized substance used in cooking, health maintenance, and even de-icing roads. It’s commonly known as table salt and considered rock salt in a more natural state.

Salt is abundant in seawater and is the main mineral that causes ocean water’s approximately 3.5 percent salinity level. The majority of salt produced comes from evaporated seawater and salt mines.

Salt is also essential for human life and body functioning. Sodium and chlorine are important elements that help maintain cellular balance, circulation, and blood sugar levels. Sodium is one of the minerals primarily responsible for maintaining your electrolytes. Common electrolytes include sodium, potassium, calcium, and bicarbonate. Without adequate sodium, your brain would not be able to send necessary electrical impulses to the rest of your body to function properly.

Just as the body requires the right amount of sodium for proper function, consuming too much salt can be considered unhealthy. Higher salt intakes are shown to increase blood pressure and water retention. Elevated sodium levels cause the body to hold on to water in order to keep the serum sodium concentration from increasing beyond certain limits. It is considered a protective response, and your body is working to maintain balance. Because excess sodium tends to cause an elevation in blood pressure, doctors recommend individuals suffering from hypertension reduce or eliminate salt intake.

There is plenty of research on salt and how it affects your health. However, studies are lacking on differing salt comparisons, which can cause confusion about specialty salts. Without adequate and reliable evidence, it’s important to take marketing claims with a grain of salt.

According to Rahaf AlBochi, RD, LD, Media Spokesperson for the Academy of Nutrition and Dietetics and Owner of Olive Tree Nutrition, salt is salt, meaning that by weight they contain the same amount of sodium. One teaspoon of salt contains around 2400 mg of sodium.

While there are many different types of salt in the world, there isn’t a salt that is healthier than another.

Dr. Johnson also suggests that controlling your salt intake helps maintain heart health. If you’re consuming more sea salt because you believe it has less sodium, you may be placing yourself at higher risk of developing high blood pressure, which raises your risk of heart disease, says Johnson.

The U.S. dietary guidelines recommend a maximum intake of 2,300 mg of sodium per day (5.8 g of salt), while the average consumer intake is 9 g of salt (3,600 mg Na) per day. Incorrect assumptions about differing salts may be contributing to higher levels of salt consumption.

AlBochi has provided reliable feedback on common, differing salts. The following comparisons will be a helpful guideline in general and before deciding to purchase the fancy stuff.

Table salt is the most commonly used salt in cooking and is generally iodized, meaning that iodine has been added, says AlBochi. It may also be called iodized salt. Iodine is added to help people get enough iodine in their diet, which is important to prevent goiter, a thyroid gland condition. Table salt is a fine, granulated salt and is a good choice when cooking.

Kosher Salt is a coarse grain salt. When used in cooking, it can add a crunchy texture to some dishes and drinks. Per teaspoon, kosher salt can have somewhat less sodium than one teaspoon of table salt. That is simply because kosher salt has a coarser grain, so less fits in the spoon. However, per weight, kosher salt and table salt have the same amount of sodium according to AlBochi.

Sea salt can be either fine grain or large crystals. It is produced by evaporation of seawater. Examples include Black Sea, Celtic, French (fleur de sel) or Hawaiian sea salt. Sea salt can have trace amounts of minerals which may offer a different flavor in cooking but offer no known health benefits. Sea salt is still salt and has the same amount of sodium per weight as any other salt says AlBochi.

Pink Himalayan salt is known as a finishing salt because it is generally used at the end of cooking to add flavor and a crunchy texture to the meal. It contains trace minerals, however, there are no health advantages to using Himalayan salt over other types of salt. According to AlBochi, It still provides the same amount of sodium per weight as any other salt.

Salt substitutes are salts that substitute some or all of the sodium with potassium, magnesium, or another mineral. Lite salt is salt that is half sodium chloride and half potassium chloride. Salt substitutes may be used by people on a sodium-restricted diet, however always check with your doctor before using these products, especially if you have kidney problems.

Seasoned salt is salt with herbs and flavorings such as celery salt, garlic salt, or onion salt. To reduce the amount of sodium in your diet, it is best to use herbs on their own instead of the seasoned salt, such as celery seed, garlic powder or onion flakes, which don’t contain any sodium.

Choosing the best salt for you really comes down to taste and preference. Expert feedback has demonstrated that salt is salt, and usually contains the same amount of sodium. Other trace minerals can be found in differing salts as one study examined and results are provided below:

According to a study on salty taste perceptions, trace mineral content like potassium and magnesium may play a role in how it tastes. However, the sodium content still remained comparable across the board for all salts examined.

The mineral content comparison for different types of salt is shown to be insignificant, and really shouldn’t be taken into consideration when choosing a salt.

Since all salts contain comparable sodium levels, it really comes down to personal preference and how much you want to spend on salt. If you’re looking for a crunchy texture with some color, Pink Himalayan could be a fun choice. Although, it’s more a finishing salt, not typically sprinkled on an already cooked meal like table salt.

The fancier the packaging and marketed health claims, the more expensive the salt will be. The following list will give you a basic idea of the cost per ounce for popular salts on the market:

Salt remains essential for health, wellness, and cooking. What has required clarification is if one kind of salt is healthier than any other. According to expert feedback, all salts are similar in sodium content with minimal trace mineral differences. The following list sums up the bottom line of what you should know about salt comparisons: