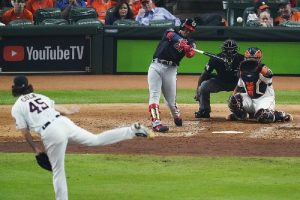 Way back in the day – 1871 to be specific – the National League was born. They eventually organized annual games to play the rival American Association – before it tanked in 1891 – in an event known as the World’s Championship Series or the Championship of the United States. These were poorly run series that lasted anywhere from three games to 15 games. After the American Association’s demise, the National League allowed some of the defunct teams to join, but for a while, they were the only game in town. In 1900, the American League was born, giving the original guys an opponent. And they absolutely hated each other…

The First Official World Series Was Played in 1903

Surprisingly, the American League won! The Boston Americans defeated the National League’s Pittsburgh Pirates three games to five. Historians believe this changed the course of Major League Baseball as we know it. Had the younger organization lost, they might have collapsed and disappeared completely, leaving us with a totally different version of professional baseball.

The World Series Has Only Been Cancelled Twice

And not for reasons you might think. They carried on playing through World Wars I and II, even when many of the best players like Joe Dimaggio went to serve overseas. In 1904, a guy named John T. Brush, the San Francisco Giants president, refused to compete with the Boston Americans, a team from the American League, which he saw as inferior. (He did let his team compete in the World Series the next year, but only after certain rules, like the 7 game series, were adopted.) In 1994, the World Series didn’t happen because of a players’ strike.

The New York Yankees Have Won the Most World Series

They’ve racked up 27 of ‘em. They’ve attended the big dance 40 times. This is the highest number of championship wins in the MLB and well, sports history.

One Team Has Never Been to a World Series at All

There are several teams who have never won a World Series, like the Colorado Rockies, San Diego Padres, Texas Rangers, Milwaukee Brewers, Texas Rangers, Tampa Bay Rays… but only has never even been. That’s the the Seattle Mariners.  2019 marks the first time the Washington Nationals have been to the World Series.

In recent years, anyway.  John Smoltz said it (and he was of one of the best ever series when the Twins beat the Braves in Game 7 back in 1991). There’s no denying that any time the World Series makes it to Game 7, you’re going to have a lot of fans on the edge of their seats. But the Dodgers and Astros were two beloved teams and the action was real. There’s no way anyone could have anticipated the outcomes, the incredible offense, and the comebacks.

Game 5 was one of the longest World Series games ever, with a final score of 12-13 and 10 innings by the time the Astros won. And there were more home runs hit during the first four games than any other World Series ever. Not to mention the drama and excitement that unfolded on the field, oh and the record hot temps.

Ticket Prices Can Be Insane

In 2017, tickets for World Series games in Houston averaged at around $1,000 a piece. For games in Los Angeles, including a potential Game 7, they were hovering at $2,970. Yeah, for ONE GAME! Tickets typically got a little cheaper, however, as the first pitched loomed closer.

Still, that’s nothing compared to 2016 when the Cubs (who hadn’t won a title since 1908) had a shot at a World Series title. Ticket prices soared above an average asking price of $6,500 for Game 5.

What controls these prices? Well, the popularity of a franchise can increase demand, but so can contenders who haven’t won a World Series in a long time. The Dodgers had both these things going for them. So did the Cubs.