Fog is a cloud that touches the ground 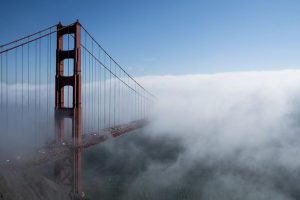 Fog is a cloud that touches the ground. Fog can be thin or thick, meaning people have difficulty seeing through it. In some conditions, fog can be so thick that it makes passing cars. Even monuments like London Bridge, in London, England, or the Golden Gate Bridge, in San Francisco, California, are almost impossible to see in thick fog.

Fog shows up when water vapor, or water in its gaseous form, condenses. During condensation, molecules of water vapor combine to make tiny liquid water droplets that hang in the air. You can see fog because of these tiny water droplets. Water vapor, a gas, is invisible.

Fog happens when it’s very, very humid. There has to be a lot of water vapor in the air for fog to form.

Depending on the humidity and temperature, fog can form very suddenly and then disappear just as quickly. This is called flash fog.

Fog is not the same thing as mist. Fog is denser than mist. This means fog is more massive and thicker than mist. There are more water molecules in the same amount of space in a fog. Fog cuts visibility down to one kilometer, meaning it will prevent you from seeing further away than one kilometer from where you’re standing. Mist can reduce visibility to between one and two kilometers.

Radiation fog forms in the evening when heat absorbed by the Earth’s surface during the day is radiated into the air. As heat is transferred from the ground to the air, water droplets form. Sometimes people use the term “ground fog” to refer to radiation fog. Ground fog does not reach as high as any of the clouds overhead. It usually forms at night. Fog that is said to “burn off” in the morning sun is radiation fog.

Advection fog forms when warm, moist air passes over a cool surface. This process is called advection, a scientific name describing the movement of fluid. In the atmosphere, the fluid is wind. When the moist, warm air makes contact with the cooler surface air, water vapor condenses to create fog. Advection fog shows up mostly in places where warm, tropical air meets cooler ocean water. The Pacific coast of the United States, from Washington to California, is often covered in advection fog. The cold California Current, which runs along the western coast of North America, is much cooler than the warm air along the coast.

Valley fog forms in mountain valleys, usually during winter. Valley fog develops when mountains prevent the dense air from escaping. The fog is trapped in the bowl of the valley. In 1930, vapor condensed around particles of air pollution in the Meuse Valley, Belgium. More than 60 people died as a result of this deadly valley fog.

Freezing fog happens when the liquid fog droplets freeze to solid surfaces. Mountaintops that are covered by clouds are often covered in freezing fog. As the freezing fog lifts, the ground, the trees, and even objects like spider webs, are blanketed by a layer of frost. The white landscapes of freezing fog are common in places with cold, moist climates, such as Scandinavia or Antarctica.

Today, engineers are working on more sophisticated ways to collect water from fog. The most effective way has been the development of “fog catchers.” Fog catchers are very large screens constructed in arid areas. As fog glides in, water droplets form around the thin screens and drip to the collection pools below. In one day, a single screen can collect more than a hundred gallons of water.

The village of Bellavista, Peru, relies on fog catchers. Bellavista is an area that has little access to liquid water—no rivers, lakes, or glaciers are nearby. Wells dry up quickly. Water for irrigation and human consumption is threatened. Every year, however, huge fogs blow in from the Pacific Ocean. In 2006, the community invested in a series of fog catchers outside of town. Now, the residents of Bellavista have enough water to irrigate trees and gardens, as well as provide for their own drinking and hygiene needs.

Engineers warn that fog catchers will only work in small areas. Still, engineers and politicians are working on ways to make more powerful fog catchers that will perhaps reduce the need for people to rely so much on groundwater.

A “pea souper” is a type of fog that forms when water condenses around microscopic particles of coal. This fog is often a brownish-yellow color, leading to the name. Pea soupers are common in areas that burn coal for energy.

The London Fog of 1952, which killed 12,000 people around the urban center of London, England, was a pea souper. The Great Fog led to legislation that regulated the coal industry and air pollution in the United Kingdom.

The foggiest place in the world is Grand Banks, a spot in the Atlantic Ocean off the island of Newfoundland, Canada. The cold Labrador Current from the north and the warm Gulf Stream current from the east create prime conditions for thick fog to form almost every day.