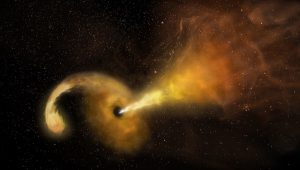 At the center of nearly every galaxy lies a monster, a giant black hole millions or even billions of times heavier than the Sun. Some, known as quasars or active galactic nuclei, shine brightly from across the universe as they continuously devour surrounding gas. But most are dormant, lurking invisibly for thousands of years—until a star passes too close and is ripped to shreds. That triggers a months long tidal disruption event (TDE), which can shine as brightly as a supernova.

Until a few years ago, astronomers had spotted only a handful of TDEs. But now, a new generation of wide-field surveys is catching more of them soon after they start—yielding new insights into the violent events and the hidden population of black holes that drives them.

“We’re still in the trenches, trying to understand the physical mechanisms powering these emissions,” says Suvi Gezari of the University of Maryland, College Park. Earlier this month at the annual meeting of the American Astronomical Society in Honolulu, Gezari presented an analysis of 39 TDEs: 22 from recent years and 17 detected in the first 18 months of operation of the Zwicky Transient Facility (ZTF), a 1.2-meter survey telescope in California.

In the standard TDE picture, the gravity of the black hole shreds an approaching star into strands like spaghetti. The black hole immediately swallows half the star’s matter while the rest arcs away in long streamers. These rapidly fall back and settle into an accretion disk that steadily feeds material into the black hole, growing so hot that it emits copious x-rays.

An x-ray mapping satellite spotted the first TDEs in the 1990s. Now, optical surveys like the ZTF are picking up the fast-changing events and capturing telltale details of the visible glow. They are also alerting other observatories, such as NASA’s Swift telescope, to make follow-up observations at ultraviolet and x-ray wavelengths.

The fingerprints of certain gases in the spectra of the visible light can reveal what kind of star went down the black hole’s maw. Gezari and her colleagues found that the TDE spectra fell into three classes, dominated by hydrogen, helium, or a mixture of gases. Hydrogen likely signals large, young stars, whereas helium events could point to the cores of older stars whose hydrogen shells were stripped away—perhaps by an earlier brush with the black hole. She says the proportions reveal something about the populations of stars at the very centers of galaxies, at distances from Earth that would otherwise be impossible to probe.

If astronomers could turn the light into a reading of how quickly material is being sucked in, they might be able to determine a black hole’s mass—something usually estimated crudely by measuring the size of its galaxy. For that, however, “We need to understand the astrophysics of the process with greater clarity,” says Tsvi Piran of the Hebrew University of Jerusalem. For a few TDEs, astronomers have been able to compare the rise and fall of the visible glow with x-ray measurements made from space—and puzzlingly, the two don’t match. The x-rays often flare irregularly, appear late, or are absent altogether.

The x-rays could be steady but obscured by a cloud of gas, hundreds of times bigger than the black hole, that forms from a backlog of material, says Kate Alexander of the Harvard-Smithsonian Center for Astrophysics. “It’s like the black hole gets indigestion because it eats too much too fast.” Piran thinks it’s more likely that the x-rays are generated in bursts, as clumps of matter fall into the black hole. Either way, astronomers aren’t ready to glean a black hole’s mass from a TDE’s brilliance.

Theory does suggest black holes can become too massive to trigger TDEs. Above a mass of 100 million suns, black holes should swallow stars whole rather than tearing them apart as they approach. So far, all of the growing number of TDEs come from smaller galaxies, suggesting the limit is real.

TDEs could even provide a window into a more elusive black hole characteristic: its spin. Dheeraj Pasham of the Massachusetts Institute of Technology has studied the soft x-ray emissions of three TDEs that pulse in semiregular beats. He says similar, higher frequency beats have been observed coming from smaller, stellar-mass black holes, and he suspects the pulsing reflects the black hole’s spin. Constraints on this property could help solve an enduring mystery: whether giant black holes form by slowly accreting stellar matter over their lifetime—a process expected to produce a fast spin—or by merging with the giant black holes from other galactic cores, which would result in a slower spin. An x-ray survey of many TDEs could reveal which process dominates.

With the tally of captured TDEs growing fast, and hundreds or even thousands of discoveries per year expected from new surveys, researchers are hopeful that the events will answer more questions. “My dream is for TDEs to be some kind of ruler or scale for black hole mass,” Gezari says. “We’re not there yet but we’re getting closer.”