If you’re not wired to wake up with the sun—but you dream of doing just that—we’ve got some advice. 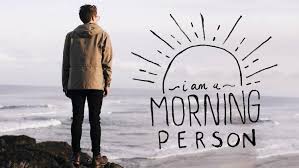 If the early bird catches the worm, what does the night owl get? Pressure to wake up sooner and a big old guilt trip for hitting snooze, says Fiona Barwick, PhD, clinical assistant professor at the Stanford Center for Sleep Sciences and Medicine. “As a society, we have come to believe that a person is weak or lazy if they aren’t awake and alert early,” she says. And yet research shows that each of us has a genetic chronotype that plays a role in when we wake and sleep. Some of us are biologically inclined to perform best in the morning (these people are called “larks”), and some are more active after dark.

In an ideal world, you could adjust your schedule to suit your body’s natural preferences. “Both larks and owls can have sleep schedules that leave them rested and productive,” says David Neubauer, MD, associate director of the Johns Hopkins Sleep Disorders Center. Unfortunately, most night owls are forced into misalignment thanks to reality’s alarm clock (think hungry kids and demanding bosses) and don’t get enough rest. Being an evening type may also up your risk for health issues like diabetes, as well as neurological, gastrointestinal, and respiratory disorders, according to a 2018 study in Chronobiology International.

The good news for night people: Genetics aren’t everything. “Your genes will dictate your tendencies, but your tendencies are not your destiny,” says Rafael Pelayo, MD, clinical professor at the Stanford Center for Sleep Sciences and Medicine. Experts share how anyone—yep, even those of us who watch TV into the wee hours—can reprogram both body and mind to wake up early more naturally and to function better all morning long.

Dream Up a Magical Morning

Changing your habits can be easier if you identify an intention to get up earlier, says Dr. Pelayo. Do you love cuddling up with a good book? Do you want to linger over breakfast? Whatever you desire (within reason), make it your motivation to wake up. “The thing you do as soon as you get out of bed cannot be something you view as a chore,” he says. “If you do not like doing it, you will not want to deal with it, and you’ll likely fail to reach your goal.” In other words, if you tend to dread exercise, a 6:30 a.m. spin class probably isn’t a great plan. Save the workout for later, and start your day with something you enjoy.

Get the First Five Minutes of the Day Right

Even if the sun isn’t up yet, expose yourself to as much light as possible. “Morning light has a stimulating biological effect even when your eyes are closed,” says Dr. Neubauer. It’s how our internal clock knows that it’s time to start the day. So ditch the blackout shades and get sheer curtains instead. And if your room doesn’t get much natural light or you want to wake before the sun? Fake it with a light simulator like Philips Wake-Up Light. To avoid grogginess, it’s critical to get out of bed as soon as your alarm sounds, says Sabra Abbott, MD, neurologist and sleep medicine physician at Northwestern Memorial Hospital in Chicago. Need help? An alarm clock like the Clocky, which rolls off your nightstand and onto the floor, will force you to get up and at ’em.

When it comes to adjusting your internal clock, slow and steady is the name of the game. “If you typically get up at 9 a.m., don’t expect to wake up at 6 after two days,” says Dr. Abbott. “That’s against the natural capabilities of your body.” Instead, gradually inch toward your ideal start time by going to bed and waking up 15 minutes earlier than usual. Move the time back by 15 minutes every two days until you get to where you want to be. Don’t mess with the total number of hours you aim for each night. Most of us need around eight hours of rest.

Stick to Your Routine

Consistency is key. Research shows that negative health consequences like weight gain and a higher risk of heart disease arise from an unstable wake-up schedule—shifting between early mornings during the week and sleeping in on the weekend. So find a sleep-wake schedule that works every day of the week. (One hour of variability on the weekends is fine, says Dr. Abbott.) And if a Sunday nap feels necessary once in a while, that’s OK. Just squeeze it in before 3 p.m., and don’t doze for more than 30 minutes, suggests Dr. Abbott.

Assuming you don’t have a sleep disorder, chilling out in a relaxing atmosphere will help sleep unfold more freely. The number one rule: no screens. “The internet is a night owl’s playground,” says Barwick. “It’s easy to get caught up in screen time and miss cues that you are tired, pushing back bedtime.” Plus, research shows that the blue light in tech has a stimulating effect on the brain and can delay release of melatonin (the hormone that makes you drowsy). Put your screens away at least an hour before bedtime. “Decreasing how much light you are exposed to in the evening can help you shift your clock earlier,” says Dr. Neubauer. Cover up other sources of glowing light in your bedroom—like the buttons on your TV and charging stations—with LightDims blackout stickers.

Put Your Food on a Schedule

Just like your sleep and wake times, your meal times should stay consistent throughout the week. Eat your biggest meal early, have a smaller lunch and an even smaller dinner, and try not to eat later than 8 p.m. “Together, these adjustments can help you become a morning person,” says Dr. Neubauer. Research suggests eating too close to bedtime can disrupt sleep quality— another reason to dine early.