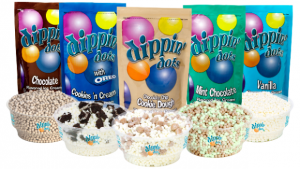 Sweets-lovers have been dipping in to the ice cream of the future since 1988. It’s tasty (candy bar crunch? Yes please!), educational (this is what happens when you play with liquid nitrogen, kids!) and, er, well-rounded. Read on to learn more.

You have science to thank for this fun dessert.

In 1987, Curt Jones was just a microbiologist researching how to quick-freeze yogurt bacteria to use in animal feed. Within a year, he had created his confection by flash freezing ice cream mix in liquid nitrogen. (At negative 320 degrees, the liquid gas is cold enough to instantly freeze anything that is added to it.) “I grew up on a farm and used to make homemade ice cream a lot,” he has said. “Working on the yogurt bacteria, I found the little beads fun to play with. Then a month or two later, I was making ice cream with a neighbor and decided it would be better if we could freeze it faster, like we were doing with the yogurt.”

The company’s first plant was a garage.

You can buy it a stadiums, malls, amusement parks – and in Asia!

Dippin’ Dots is sold in 14 countries, including Honduras and Luxembourg. Japan was the company’s first international licensee in 1995.

No, its not the ice cream astronauts eat.

Space travelers’ ice cream is freeze-dried and will not melt. Dippin’ Dots is flash frozen and can still dissolve if not stored at the proper temperature (which, by the way, is negative 40 degrees Fahrenheit).

Can’t choose your favorite flavor?  There’s a quiz for that.

The Dippin’ Dots personality test asks thought-provoking questions such as “What would you do if you saw your crush at the mall with someone else?” and “You get $50 for your birthday. What do you do with it?” Apparently, more than half of the quiz-taking population are Strawberry.

On July 4, 2014 in Nashville, Tenn., Dippin’ Dots nabbed the trophy for most ice cream cups prepared by a team of five in three minutes (473!). Country singer Ashley Monroe even pitched in for the contest!

The company (unsuccessfully) sued a competitor.

In 1996, Dippin’ Dots sued fellow cryogenic ice cream brand Mini Melts for infringement. Nine years of litigation later, the company lost its fight when it was ruled it hadn’t acquired its patent properly.

Then, they almost went bankrupt.

When Dippin’ Dots filed for Chapter 11 bankruptcy protection in November 2011, Jones insisted, “We’re going to keep making Dippin’ Dots, so nobody needs to worry.” He was right. A year later Oklahoma businessman Scott Fischer purchased the company for $12.7 million.

And, they’ve got a sense of humor.

On April 1, 2015, the company posted a story on its site about their new “giant-sized Dippin’ Dot option—The Jumbo Dot!” Sadly, the oversize confection—touted as the perfect treat for graduation parties and weddings—was an April Fools’ Day joke. Further proof of their sense of humor? This commercial.