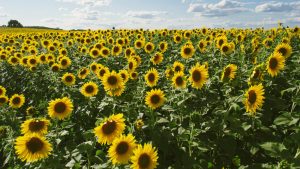 Sunflowers, in all their colorful glory, are a happy sight to behold—but there’s more to their nature than just beauty. The multipurpose plants deliver healthy snacks, useful oil, and birdseeds. Let your garden knowledge flourish with these facts about Helianthus Annuus.

1. THEY’RE NATIVE TO THE AMERICAS.

Like potatoes, tomatoes, and corn, the cheerful plants didn’t originate in Europe. They were cultivated in North America as far back as 3000 BCE, when they were developed for food, medicine, dye, and oil. Then, they were exported to the rest of the world by Spanish conquistadors around 1500.

2. THEY WERE BROUGHT TO RUSSIA BY ROYALTY.

Tsar Peter the Great was so fascinated by the sunny flowers he saw in the Netherlands that he took some back to Russia. They became popular when people discovered that sunflower seed oil was not banned during Lent, unlike the other oils the Russian Orthodox Church banned its patrons from consuming. By the 19th century, the country was planting two million acres of sunflowers every year.

3. THEIR POPULARITY STANDS THE TEST OF TIME.

Russian immigrants to the United States in the 19th century brought back highly developed sunflower seeds that grew bigger blooms, and sparked a renewed interest in the native American plant. Later, American sunflower production exploded when Missouri farmers began producing sunflower oil in 1946, when Canada unveiled a mechanical seed-crushing plant, and in the 1970s, when consumers looked for low-cholesterol alternatives to animal fats.

The flowers not only look like the sun, they need a lot of it. They grow best with about six to eight hours a day but more is even better. They can grow as tall as 16 feet, although many varieties have been developed to thrive at different heights. Flowers planted too close together will compete and not blossom to their full potential.

Sunflowers display a behavior called heliotropism. The flower buds and young blossoms will face east in the morning and follow the sun as the earth moves during the day. However, as the flowers get heavier during seed production, the stems will stiffen and the mature flower heads will generally remain facing east.

In the summer of 2014, Veteran green-thumb Hans-Peter Schiffer toppled the Guinness World Record for third year in a row. The local fire brigade lent its help in measuring the sunflower, which required its own scaffold.

7. THEY HAVE A HISTORY OF HEALING.

In Mexico, the flowers were thought to sooth chest pain. A number of Native American tribes agreed with the plant’s curing properties. The Cherokee utilized an infusion of sunflower leaves to treat kidneys while the Dakota brought it out to sooth “chest pain and pulmanery troubles.”

8. THEY HAVE TRAVELED TO SPACE.

In 2012, U.S. astronaut Don Pettit brought along a few companions to the International Space Station: sunflower seeds. Petit regularly blogged about his budding friendship and shared photos of the gardening process.

9. THEY ARE ACTUALLY THOUSANDS OF TINY FLOWERS.

Each sunflower’s head is made of smaller flowers. The petals we see around the outside are called ray florets, and they cannot reproduce. But the disc florets in the middle, where the seeds develop, have both male and female sex organs, and each produce a seed. They can self-pollinate or take pollen blown by the wind or transported by insects.

10. THEY CAN BE USED AS SCRUBBING PADS.

Once the flower heads are empty of seeds, they can be converting into disposable scrubbing pads for jobs too tough for your cleaning tool.

Check out this time-lapse video of sunflowers growing from seed to seeds—indoors!